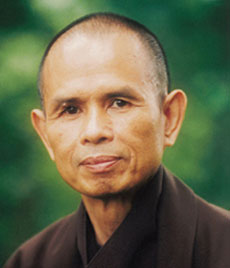 Thich Nhat Hanh spoke of perceptions when I went to listen to him in London on my birthday in October 2000, and what he had to say has stuck with me all of these years. He said that we see everything through our perceptions, and they are nearly always wrong.  This was brought home to me again  when reading Byron Katie’s work. The first question she says to ask about anything we are facing is ‘is that true?’ It is amazing how many thoughts can float through our minds each day, and when the question ‘is that true?’ is asked, the answer is ‘no’.

Our perceptions are conditioned by the many afflictions that are present in us: ignorance, craving, hatred, anger, jealousy, fear, habit energies, etc. We perceive phenomena on the basis of our lack of insight into the nature of impermanence and interbeing. Practicing mindfulness, concentration, and deep looking, we can discover the errors of our perceptions and free ourselves from fear and clinging. All suffering is born from wrong perceptions. Understanding, the fruit of meditation, can dissolve our wrong perceptions and liberate us. We have to be alert always and never seek refuge in our perceptions.

There is a difference between knowledge and wisdom.
Accumulating facts and ideas and so on is knowledge.
Understanding this knowledge is wisdom, and is totally
unrelated to whether someone has a lot of book learned
knowledge or a little. It is as mistaken to assume a scholar
could not have realized as it is to believe a ‘dullard’
as in the Joseph Goldstein story, or someone like Hastamalaka
could not have realized. Each have their own
advantages and disadvantages along the way, their own
salvation to diligently work out.

The ‘unlearning’ that people like Idries Shah talk about
does not mean to become an intellectual jelly, with mush
for brains. He was rather intelligent himself, and very
learned. As was Rumi, and Hafiz and many others. The
challenge for those blessed with intelligence is to utilize
it in a way which helps and not hinders spiritual realization,
to let go of the idea that intelligence will necessarily help
them, or makes them superior. But nor is it wise to look down
on the learned and intelligent and judge them as having only
accumulated useless knowledge. Hafiz himself could recite
the entire Qur’an, and we really are way off when we find
ourselves judging the spiritual state of others.

Something else to ponder on this topic: if there were not
people who devoted their lives to learning, to accumulating
knowledge, we would not have the Bible, the Qu’ran,
the Buddhist scriptures and may other spiritual works. We
would know nothing of the life of Jesus or the Prophet or
Buddha, as these were all memorized by scholars and
written down at a much later time, often hundreds of years
later.
I leave you with the idea that if we are feeling superior
about something, such as judging for ourselves that if
someone is knowledgeable they are per se unrealized, we may
like to open our minds a little, and allow for another
possibility. We could at least suspend judgement, as
judging others is usually a much less fruitful use of
our time than our own practice can be in helping us to
see we are off. And when we do this we are no different
to the intelligent brothers who dismiss the dullard in the
Goldstein story – just doing the same thing in reverse.

With Love, did you ever notice the more you give
the more you get? Jesus fed five thousand with
a few fish and a bit of bread. There is no lack of
abundance and true wealth grows the more it is
shared.

Take everyone as you find them. Do not make your mind
up about them based on what other people tell you about
them, and most especially not on what they tell you about
themselves. Both are almost invariably skewed. People
have their own prejudices against and biases toward others,
and have their own hang ups or high opinions about themselves.
And when entering a conversation with others, in a public
setting, leave all personal bias, such as friendships, out
of the equation as far as possible, as that leads to a more
unbiased seeing of what actually is. Not an easy task, I
know.

A while back I travelled down to London by rail to meetup with a friend. When I left the train, I decided topay a visit to the ladies. On coming out of the cubicle,I went over to wash my hands, and glanced casually upinto the mirror. I wasn’t there!! The washbasins and thecubicles were reflected, but not gill!!!

I stood there for what seemed like an age but must havebeen just a few moments. “Where am I?” “Well, I must havereally disappeared now, but I didn’t realise you becameinvisible!”Just then, I watched in the mirror as a lady emerged fromone of the cubicles. I turned around to look behind me, butshe wasn’t there! I looked back, and then it suddenly clicked.There wasn’t actually a mirror. It was a washroom where eachside was a mirror image of the other, and the double row ofwashbasins didn’t have a mirror above them, and the lady hadbeen in one of the opposite cubicles. hahaha. I still laughwhen I think about it.

Words may be just words, or they may evoke
experiences, memories, responses, reactions,
feelings, emotions and more. Those written
words may help us clear out a lot of garbage,
especially when we can see that all of the
traditions are saying much the same.

Perhaps what we get from the written word is
what we are ready to get from it. Perhaps if
we are looking to get something, we won’t get
anything. Perhaps if we are open to Truth we can
see it in a child’s ABC book, a person’s face, a
master’s eyes, or the smile of a homeless person.And
if we are not ready, no master can transmit
anything. And if we are ready, is a  master even
needed? (“There are more questions than answers,
and the more I find out the less I know…” )

We may not be able to write Truth down, it does
not mean someone cannot realise it by reading
a book, or undertaking any other activity.