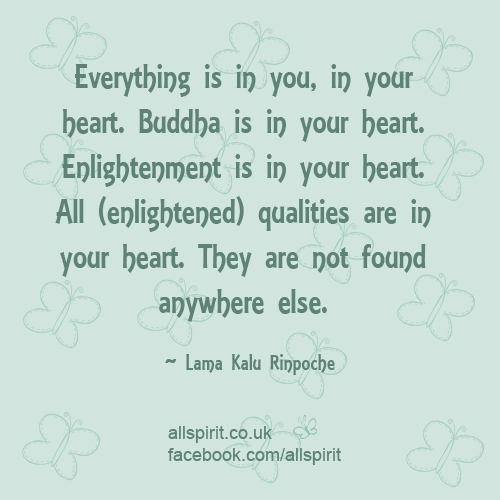 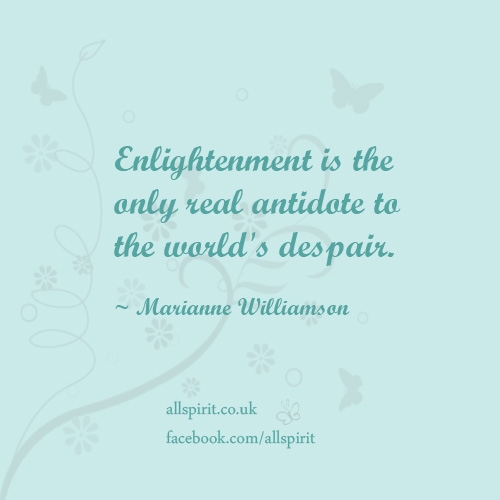 Enlightenment is the
only real antidote to
the world’s despair.

Chop that wood
Carry water
What’s the sound of one hand clapping
Enlightenment, don’t know what it is

I’m in the here and now, and I’m meditating
And still I’m suffering but that’s my problem
Enlightenment, don’t know what it is

Enlightenment says the world is nothing
Nothing but a dream, everything’s an illusion
And nothing is real

All around baby you can see
You’re making your own reality everyday because
Enlightenment, don’t know what it is

Index of Lyrics on Allspirit

There is a difference between knowledge and wisdom.
Accumulating facts and ideas and so on is knowledge.
Understanding this knowledge is wisdom, and is totally
unrelated to whether someone has a lot of book learned
knowledge or a little. It is as mistaken to assume a scholar
could not have realized as it is to believe a ‘dullard’
as in the Joseph Goldstein story, or someone like Hastamalaka
could not have realized. Each have their own
advantages and disadvantages along the way, their own
salvation to diligently work out.

The ‘unlearning’ that people like Idries Shah talk about
does not mean to become an intellectual jelly, with mush
for brains. He was rather intelligent himself, and very
learned. As was Rumi, and Hafiz and many others. The
challenge for those blessed with intelligence is to utilize
it in a way which helps and not hinders spiritual realization,
to let go of the idea that intelligence will necessarily help
them, or makes them superior. But nor is it wise to look down
on the learned and intelligent and judge them as having only
accumulated useless knowledge. Hafiz himself could recite
the entire Qur’an, and we really are way off when we find
ourselves judging the spiritual state of others.

Something else to ponder on this topic: if there were not
people who devoted their lives to learning, to accumulating
knowledge, we would not have the Bible, the Qu’ran,
the Buddhist scriptures and may other spiritual works. We
would know nothing of the life of Jesus or the Prophet or
Buddha, as these were all memorized by scholars and
written down at a much later time, often hundreds of years
later.
I leave you with the idea that if we are feeling superior
about something, such as judging for ourselves that if
someone is knowledgeable they are per se unrealized, we may
like to open our minds a little, and allow for another
possibility. We could at least suspend judgement, as
judging others is usually a much less fruitful use of
our time than our own practice can be in helping us to
see we are off. And when we do this we are no different
to the intelligent brothers who dismiss the dullard in the
Goldstein story – just doing the same thing in reverse.

Here he was to get one more great disciple. Prabhakara was a brahmin.
He had a son who was a dumb boy. He appeared to be dull. But Shankara
felt that he was a yogi. Instead of asking the parents who had brought
the boy ‘Why is the boy like this? since when?’ he asked the boy
straightaway : “Who are you, my boy?” What else could be so sacred a
place as the one where the divine master was standing for the yogi to
break his silence? One who was dumb spoke in answer, “I am the eternal
self and not dead matter.” This was the simplest form of expressing the
nature of the self. By the grace of the master, the dull and the silent son
of that couple revealed himself to be a great and wise sage. The master
felt happy and taking him as disciple, named him Hastamalaka.

“One of my favorite stories from the Buddha’s time tells
about a disciple of the Buddha who was very dull. His
brother, another disciple, was an arhat, fully
enlightened, and was also very smart. The dullard had
been inspired by the teachings and had been ordained as
a monk. He had the sweetest heart, but his mind was
really slow. Because he was slow, his brother gave him
as his practice a four-line verse of the Buddha’s
teachings to memorize.

The dullard struggled and struggled to learn one line.
Then, as he was trying to learn the second line, it
pushed out the first. One line was all his mind could
hold. This struggle went on and on; he simply did not
have the intelligence to do it. His arhat brother
finally gave up and said, “This is hopeless. You had
better leave the order of monks.” The poor dullard was
totally dejected. He felt so sad, because his heart was
devoted to the Dharma.

As the dullard was walking back to his village, feeling
very low, the Buddha, knowing what had happened, came
and walked by his side. He stroked the poor dullard’s
head and consoled him by giving him a practice exactly
suitable to his condition. “Here’s a meditation subject
for you. Take this white hankerchief and stand out in
the hot sun and rub it.” That was the whole meditation.

So the dullard took the hankerchief, went out in the
sun, and began to rub it. Slowly the hankerchief started
to become dirty with the sweat from his hand. As that
happened, memories awakened in him of previous lifetimes
of practice, when he had seen impurities coming from his
body. As he continued to watch the soiled handkerchief,
a profound dispassion arose and his mind opened. He
became fully enlightened, intelligence and all the
traditional psychic powers came to him, in addition to
deep understanding of the Dharma. The story then ends by
describing some good-humored psychic tricks the former
dullard played on his surprised brother.

I feel great affection for the dullard.”

From Turning The Mind Into An Ally

In gathering our scattered mind we begin to discover who we really are right now, just by seeing that the web of thoughts we solidified as “me” is actually a series of vibrations. If we don’t learn to see through this web, however, our continual dreamlike fabrication of “me” will continue to be our meditation. We could be enveloped in it for our whole life . Believing that thought patterns are a solid self is the source of our bewilderment and suffering. Seeing through this simple misunderstanding is the beginning of enlightenment.