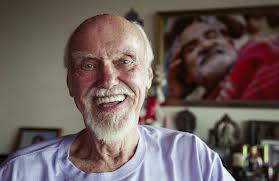 Ram Dass (born Richard Alpert; April 6, 1931) is an American contemporary spiritual teacher and the author of the seminal 1971 book Be Here Now. He is known for his personal and professional associations with Timothy Leary at Harvard University in the early 1960s, for his travels to India and his relationship with the Hindu guru Neem Karoli Baba, and for founding the charitable organizations Seva Foundation and Hanuman Foundation. He continues to teach via his website. From wikipedia

Remember, we are all affecting the world every moment, whether we mean to or not. Our actions and states of mind matter, because we’re so deeply interconnected with one another. Working on our own consciousness is the most important thing that we are doing at any moment, and being love is the supreme creative act.

If we imagine that our mind is like the blue sky, and that across it pass thoughts as clouds, we can get a feel for that part of it which is other than our thoughts. The sky is always present; it contains the clouds and yet is not contained by them. So with our awareness. It is present and encompasses all our thoughts, feelings, and sensations; yet it is not the same as them. To recognize and acknowledge this awareness, with its spacious, peaceful quality, is to find a very useful resource within. We see that we need not identify with each thought just because it happens to occur. We can remain quiet and choose which thought we wish to attend to. And we can remain aware behind all these thoughts, in a state that offers an entirely new level of openness and insight.

From: How Can I Help; Stories and Reflections on Service Ram Dass and Paul Gorman

Purification is the act of letting go. There is a statement that appears in one of the Gospels which states that men need not disfigure their faces in order to know God. There is a type of righteousness and seriousness that creeps in the minute we decide we’re going to do spiritual practices, where suddenly it’s serious work, and we have to be a cer- tain kind of way-sort of “tight-assed.” We may find that, though it looks good from the outside, it begins to feel kind of lousy from the inside. And there is a way in which deny- ing too much stops flow. There are a lot of people who are really good meditators, who sit perfectly and their minds get very quiet. But they aren’t liberated-because they have pushed away form, they’ve pushed away the earth, they’ve pushed away the heart, they’ve pushed away flow.

If I understand this game at all, it’s a game of exquisite balancing. And the balancing can be understood within different systems. For example, in southern Buddhist meditation, Theravada Buddhist meditation there are three components that are emphasized. One is called sila, one is called samadhi, and one is called panna. Sila is the purification: non-killing, non-stealing, non-lying, right speech, mindfulness. And panna is right understanding and right thought, or the wisdom connected with it. Now if we watch the way the game works with those three components – purification, concentration and wisdom-we’ll see that we wouldn’t even start this dance without a little bit of wisdom. We have to understand a little bit of what the game is about even to want to sit and meditate. So we have a little bit of panna, and then we try to do samadhi, concentration. But every time we try to concentrate, all of our other desires, all of our other connections and clingings to the world keep pulling on us all the time. So we have to clean up our game a little bit; that’s called sila, purification. We clean up our game a little bit, and then our meditation gets a little deeper. As our meditation gets a little deeper, we are quieter and we are able to see more of the universe so that wisdom gets deeper and we understand more. The deeper panna makes it easier to let go of some of the attachments, so it makes it easier to increase the sila. And the increased sila allows the samadhi to get deeper. So, we begin to see the way these three things all keep inter- weaving with one another. They’re a beautiful balancing act.

From: Grist for the Mill by Ram Dass

If you want to play a little bit with a renunciation practice, pick some desire that you encounter every day. You decide which one: the desire to eat something or other, the desire for a cigarette, whatever it is you want to play with. Pick something that you usually give in to every day – like, let’s say, a cup of coffee in the morning – and for one day, don’t do it. Then the next day, do it much more than you usually would – have two cups of coffee. Start to study your reactions. Notice the difference in your feelings toward the desire on the first day and on the second day.

Maybe another time you’ll want to take two desires to work with: one day don’t satisfy one and doubly satisfy the other, and then flip them around. Try to be very attentive to what’s going through your mind about it. If you’re keeping a journal, write about it in your journal. Start to relate to your desires as something you can scrutinize rather than as things that totally suck you in all the time, things that consume you. Get into a friendly relationship with your desires. Play with them, instead of being driven by them all the time. Desires get to be fun, really, once we’re observing them instead of mechanically reacting to them.

The whole game of renunciation and purification is an experiment – an experiment in how quickly we can extricate ourselves from being attached to our desire systems. Notice that it isn’t a question of getting rid of desires – that’s a misunderstanding. Trust me, the desires will stay around! We’re just loosening their hold on us, getting clear enough of them so we can see them in some sort of context.

from Paths to God: Living The Bhagavad Gita by Ram Dass

One day a rabbi, in a frenzy of religious passion,rushed in before the ark, fell to his knees, and started beating his breast, crying, “I’m nobody! I’m nobody!”

The cantor of the synagogue, impressed by this example of spiritual humility, joined the rabbi on his knees. “I’m nobody! I’m nobody!”

The “shamus” (custodian), watching from the corner, couldn’t restrain himself either. He joined the other two on his knees, calling out, “I’m nobody! I’m nobody!”

At which point the rabbi, nudging the cantor with his elbow, pointed at the custodian and said, “Look who thinks he’s nobody!”

From: How Can I Help? by Ram Dass and Paul Gorman